As part of Governor Andrew Cuomo’s annual statewide Thanksgiving drive, Wegmans donated meals to be prepared by culinary students at East and then delivered throughout the community by the Irondequoit Kiwanis Club. The meals fed 1,200 people in the Greater Rochester Area. 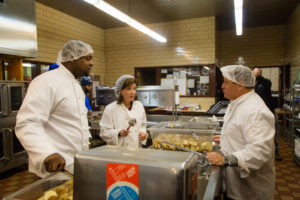 U.S. Secretary of Energy Dr. Ernest Moniz and U.S. Senator Charles Schumer Visit and Tour to voice their support for the University’s Laboratory for Laser Energetics, 10.27.16

Sen. Charles Schumer invited Moniz to visit the University of Rochester to tour the Laboratory for Laser Energetics, which is the largest university-based U.S. Department of Energy (DOE) program in the entire country, and meet with University leadership, LLE scientists, staff, and students. 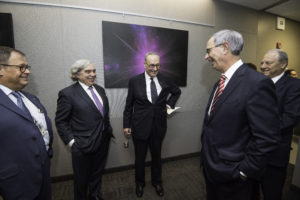 As part of the University’s 2016 Meliora celebration and at the invitation of U.S. Rep. Louise Slaughter, Dr. Francis Collins visited and toured the Medical Center and gave the keynote address. 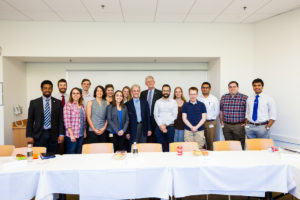 Meeting in the VISTA Collaboratory, Provost Rob Clark and representatives from the University, Harris Corp. and PARC, a Xerox Company, provided an update on data science initiatives at the University for New York State Senator Michael Ranzenhofer. Sen. Ranzenhofer led the effort to establish the Rochester Center of Excellence in Data Science at the University of Rochester. 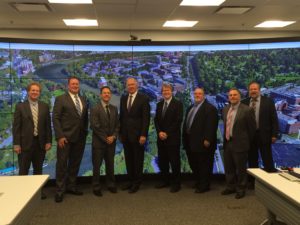 Senator Schumer greeted University of Rochester students participating in Wilson Day. Celebrated each fall for more than 25 years, Wilson Day is an annual day of community service for new and incoming UR students. This year, more than 1,300 students volunteered in the Rochester community with over 70 partnering organizations. 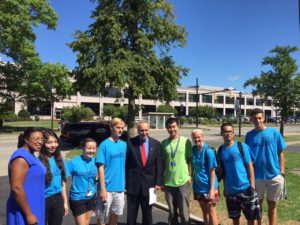 New York State Senator Rich Funke visited the Highlands at Pittsford, located on the outskirts of the Village of Pittsford. His tour included the campus and facilities for all levels of care: independent living, assisted living, and skilled nursing. At the conclusion of the tour, Sen. Funke met with about two dozen residents to listen to their concerns and answer questions.

This award, named for one of the nation ‘s greatest benefactors to higher education, recognizes individuals who embody the high ideals for which the University stands.

Rep. Slaughter Announces Funding for LLE, 4.17.15
Congresswoman Slaughter visited the Laboratory for Laser Energetics (LLE) to announce that $68 million has been included in the House Energy and Water Development Appropriations bill for the LLE for fiscal year 2016. This level of funding avoids a $7.5 million cut proposed by the White House that could have resulted in significant staff reductions and limited the LLE’s program, operations and experiments on OMEGA and OMEGA EP lasers in support of the Department of Energy. 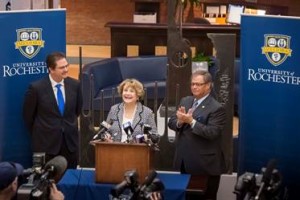 State Attorney General Eric Schneiderman met with University of Rochester officials and faculty on Tuesday, April 7, 2015.  Schneiderman’s visit and tour of the University included a discussion at the VISTA Collaboratory about the University’s data science initiatives.

The University acted as host for Mayor Lovely Warren’s press conference highlighting the importance of neighborhood-based policing, and enhancing police-community partnerships. At the University’s Barnes & Noble in the heart of College Town, a transformational project for our city that enjoyed the mayor’s support, she thanked generous donors to the Rochester Police Department’s Books and Bears Program. The program collects donations of new children’s books and stuffed animals for patrol officers to carry in their cars and give to young children they might encounter at a crime scene or some other traumatic event. 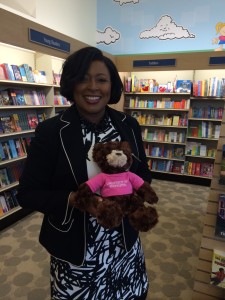 U.S. Senator Kirsten Gillibrand visited the River Campus to discuss her reintroduction of The Campus Accountability and Safety Act with student leaders, faculty, and law enforcement of several area schools. In addition to discussion of the bill, UR students who participated in the roundtable shared the University’s new “It’s on Us” campaign video. 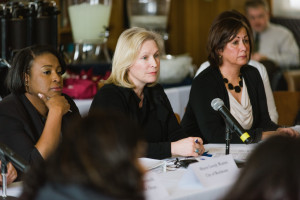 University officials celebrated with Mt. Hope community members; city, county, state, and federal government leaders; and project partners the dedication of College Town, the $100 million shopping, dining, business and residential district in the city of Rochester near River Campus and the Medical Center. The 20,000 square-foot, two-level Barnes & Noble — which anchors College Town and is both a community and University bookstore — was the first tenant to open for business. Several future College Town tenants, including Breathe yoga and juice bar, Moe’s Southwest Grill, Constantino’s Market, Insomnia Cookies, Jimmy John’s Gourmet Sandwiches, and the DelMonte Hotel Group took part in the dedication ceremony, previewing the goods and services they will offer.

Congresswoman Louise Slaughter brought the new Regional Director for the U.S. Economic Development Administration, Andrew Reid, to the University to meet with University leaders and the local optics, photonics, and imaging sector to share the community’s rich history and discuss future opportunities.

On October 28, 2013, the University hosted NYS Attorney General Eric Schneiderman at the Hatch Recital Hall at the Eastman School of Music for a Community Forum to discuss issues including environmental protection, labor and civil rights, health care, and consumer fraud.

President Seligman presented Rep. Louise Slaughter with The Science Coalition’s Champion of Science Award in recognition of her career-long dedication to supporting science and research. As the only microbiologist in Congress, Slaughter is a longtime supporter of federal research funding at agencies such as the NIH, DOE, and NSF, and dedicated many years to passing the Genetic Information Non-discrimination Act, which was finally enacted in 2008. A crowd of more than 100 congratulated the Congresswoman on receiving the award.

Governor Andrew Cuomo, NYS Senators Jim Alesi and Joe Robach, and NYS Assemblyman Harry Bronson joined officials from the University of Rochester and IBM to unveil the IBM Blue Gene/Q, one of the world’s most powerful supercomputers for health research housed at the University’s Health Sciences Center for Computational Innovation (HSCCI). The HSCCI is a $100 million partnership between the University and IBM dedicated to applying high performance computing solutions to the nation’s health challenges. In 2011, HSCCI was a priority of the Finger Lakes Regional Economic Development Council and received $5 million in state funds to complete this phase of the project. HSCCI has since received two additional awards from the state totaling $5.5 million.

Rochester Mayor Tom Richards and University of Rochester President Joel Seligman joined neighborhood leaders to celebrate the opening of the Erie-Lackawanna bridge, another physical embodiment of the University’s connection with the city and its surrounding neighborhoods.

The University of Rochester community was joined by Lt. Governor Robert Duffy, NYS Assembly Speaker Sheldon Silver, and Assemblymen  Morelle, Gantt and Bronson to officially open the doors to the new Saunders Research Building.  The new facility – the first LEED certified building on campus – serves as the hub for clinical and translational research for both the Medical Center and a network of researchers across the state, and represents a new model for creating an academic space that fosters interaction and collaboration among its occupants.

Register to vote in a matter of minutes and make a difference.

Where Do I Vote?

To find your polling place, or to verify your voter registration information, use the NYS Board of Elections Voter Registration tool

Are you interested in serving your community as an Election Inspector? Learn more here!